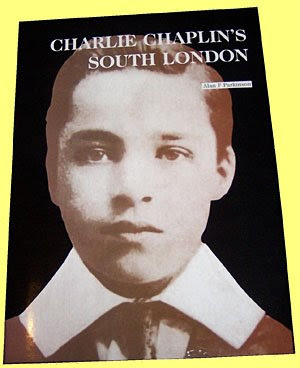 Charlie Chaplin's South London, by Alan F. Parkinson, is about Charlie's upbringing and looks at education, religion, work and leisure pursuits during the time of Chaplin's youth. Many schools were involved with the project, with work they produced featured in the book. 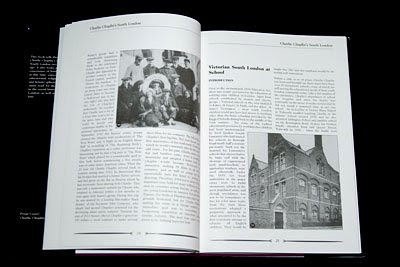 As reported by Chaplin fan, Jack McInroy:
"Alan Parkinson is a senior lecturer in history and education at London South Bank University. He specializes in political Irish history and has written books on the troubles in Northern Ireland as well as coordinating the Charlie Chaplin's south London primary school project." 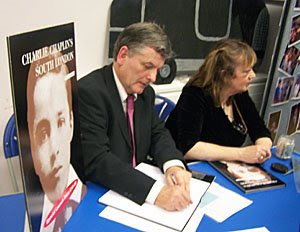 Mr. Parkinson signing books at the event today.
McInroy also shares with us some photos from the event, which included at the event Chaplin's youngest son Christopher Chaplin and Kate Guyonvarch of the Association Chaplin. 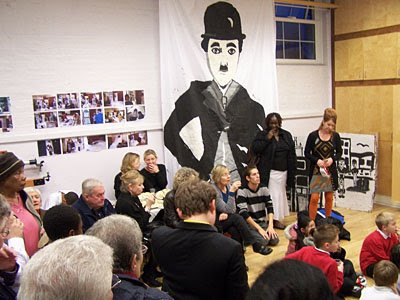 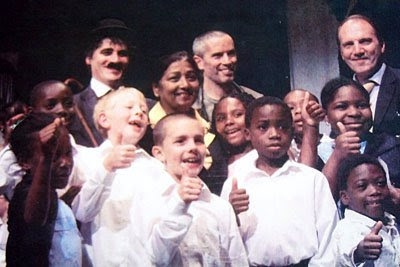 Jack also got to play his favorite role today as Charlie Chaplin (top left), as he does often in London, like this performance at the Unicorn Theatre in Southwark (near London Bridge) this summer. We send our special thanks to Jack for sharing this special book launch event with us.

As for where to get this book? The book is not quite available to the public, yet. It is listed with Amazon USA and Amazon UK, but not currently available on those sites. More details as they come. You can contact us for more contact information for the book. Special thanks to Jack for the information on this event.

December 1, 2008 - You can order directly from Dr. Parkinson at Amazon UK. Check the Used book section under AF Parkinson. He does send outside the UK. (Note: USA sellers have this priced at a high cost.)

UPDATE: I don't know when (or if) available at these links but bookmarking them for you:
Amazon France
Amazon Japan

UPDATE NOVEMBER 18TH!!!
I have received word from author Alan Parkinson about his new book. The book will be available sometime during the week of November 23rd, but he included this information to share with our readers:

'Charlie Chaplin's South London', by Dr Alan F Parkinson [LSBU]
tells the story of south London's most famous citizen's childhood. In doing so it looks at work, leisure, educational and religious aspects of late Victorian life and is a must-read not only for Chaplin fans but also for those interested in the social history of London.

For our UK readers:
The hardback book is priced at £15 [plus £2 postage] and can be obtained from:

SPECIAL RELATED FILM: Mr. Parkinson also mentioned a special screening of a related documentary film will be shown in the near future in the UK.

received a message from a friend today. she said:

"Hi Jack, a strange coincidence happened to my mum. In the 70s she was walking down Kennington Road. You probably know that Charlie Chaplin lived in a house along there, very near to the Two Dogs pub (used to be called Charlie Chaplin's). As she passed the house, there was Charlie Chaplin and his wife Oona in a Rolls Royce! He was showing Oona the house. The strange bit is, in mum's bag she had his autobiography, which she happened to be reading at the time! So she got it out and asked him to sign it! She remembers looking at his hands and noticing how small they were. So, we have his autobiography with his signature! Must be worth something."

Hi Jacko,
What a great story! Thanks so much for sharing with us.

We hope Alan's book does well.

Thanks for all your help with this,
Linda