'The Immigrant' will be shown during this series on November 29th.
The series begins November 8 with the showing of "Children of Divorce" and continues each weekend through December 14th, 2008. The program is at the East Building auditorium and admission is free (seating is limited, so do arrive early). 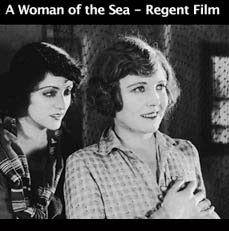 Photo from The Sea Gull - the Hill Family Collection.
The Sea Gull book is available at ednapurviance.com
"This stylistic beau geste was previewed at the home of Charlie Chaplin and made its director the toast of stellar Hollywood for a time. "Salvation Hunters" never became a popular success, but Mr. Sternberg was touted as Mary Pickford's next director and did complete a feature commissioned by Mr. Chaplin, a comeback vehicle for his former leading lady and consort, Edna Purviance. Titled "The Sea Gull" and then "A Woman of the Sea," it displeased the patron, who either destroyed the negative or locked it away in a vault. It remains one of four "lost" Sternberg movies of the late 1920s...

The great Sternberg silents still await DVD editions. Even the Dietrich inventory needs fresh showcasing, which might as well begin with the best of the batch, "Morocco" and "Shanghai Express." There is a new DVD edition of "Scarlet Empress," which will merit a column in 2009, its 75th anniversary year... " - The Washington Times, Gary Arnold
Posted by Edna's Place at 6:06 AM