In the winter of 1972, I was with my parents on a trip to Arizona. We drove over to Lake Havasu City, Arizona (a man made lake and resort along the Colorado River). I will show the other picture I have later of the town they built around the fame London Bridge.

And yes, this is the real London Bridge that Charlie Chaplin once knew in the city of London. The bridge was bought by Robert P. McCulloch and hauled piece by piece to Arizona. It became the center piece for the town of Lake Havasu. 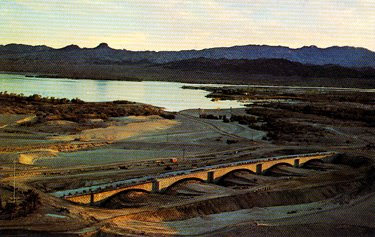 1970 - During the building. Picture - L.Wada Collection
Apparently London didn't want this bridge anymore (wanted to replace it with a new one), and put it up for sale. I really like to see things kept where they are originally. But the only thing I can say about the project, the bridge was saved and now visited as one of the top attractions in Arizona, just not London.

(I do recall Charlie making a comment about this at the time.)

Part two of the London Bridge visit soon!
Posted by Edna's Place at 5:05 AM

it is always been thought here in london that the americans that bought london bridge - that was being replaced - thought they were purchasing the more elaborate tower bridge which is located about a mile away.

still, a nice item to have.

I remember reading that too. They probably did, but don't want to admit it.

(You know those, Americans, wheeling and dealing and sometimes get a bit confused on what's what... ;-)