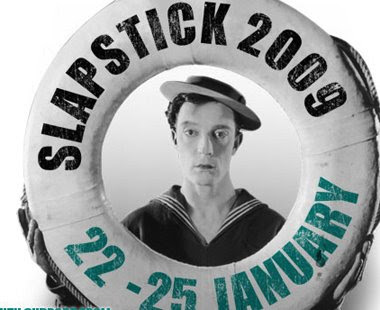 "Slapstick returns for its fifth year bringing laughter to Bristol at the time of the year when we need it most. This year’s festival is packed with some of the world’s funniest silent comedies, brought to life by an unprecedented line-up of special guests.

This year, alongside long-standing Slapstick venues Watershed and Arnolfini, Bristol Old Vic hosts some of the festival’s highlights welcoming an array of very special guests including beloved national treasure Eric Sykes and The Goodies in conversation with Phill Jupitus." - from Slapstick 2009

Introducing some our readers to UK shows
As fans in the UK know, Paul Merton is seen or heard on several programs in the UK. Here is a link to the UK program 'Just a Minute' (UK quiz and entertainment show) which Paul Merton is one of the guest. (program 37 minutes - site is popular, so does stall at times).

Update: Hope some of our readers got to enjoy the program this year. Watch for more dates for Paul Merton on this Silent Clowns tour in the UK in 2009.