In August of 1933, the very young Alistair Cooke was invited to cruise on Charlie Chaplin's yacht the Panacea to Catalina Island. Paulette Goddard was also on the trip.

Cooke filmed this voyage, which recently has been shown on the Unseen Alistair Cooke about his adventure in America. This same film clip has been packaged onto the new Chaplin DVD 15th Anniversary Edition. 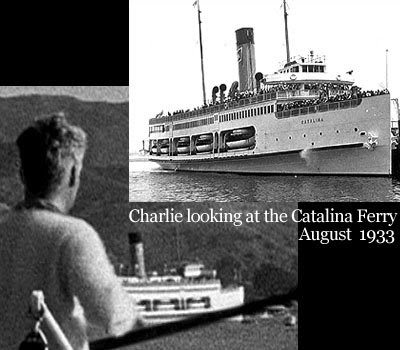 The SS Catalina made its run to Catalina from 1924 until 1975. Today, the ferry is being cut up for scrap, as people had failed to save it, after it sat for years, falling into disrepair. (Partly from owners who didn't have the money to upkeep it, or cared too.)

For a brief moment in this film by Alistair Cooke, we see Charlie Chaplin, looking at this same ferry, during its hey-day. Over the years, Edna Purviance took the ferry, as did her grand nieces and other family members. (Lita Hill ran a T-shirt/gift shop on the island.)

The film was taken about August 11-12, 1933. We know this from records from Cooke, but also from the headlines on the newspaper Chaplin and Goddard were reading.

Jean Malin (known as one of the first openly gay performers) had finished a show the evening before on August 10th and was leaving with his friend, actress Patsy Kelly. Somehow, the gears appeared to have gotten stuck in his car. He asked for a 'friendly' push, but rolled through the guard rails and into the ocean. Malin drowned in the accident, being pinned inside. Kelly was able to escape.

Articles about the accident appeared on August 11 and 12th in 1933. It was part of the headlines Charlie Chaplin and Paulette Goddard were reading, as Cooke filmed the couple.

And it was the same day Cooke captured the SS Catalina just off Catatina Island, for a brief moment.

Several pieces of history, caught on one piece of film...
Posted by Edna's Place at 4:43 PM