Author Glen David Gold will have a novel released in May 2009 called 'Sunnyside'. It features Charlie Chaplin as the lead character with a cast of 'historical and fictional' characters, including Mary Pickford, Douglas Fairbanks and even Rin Tin Tin. 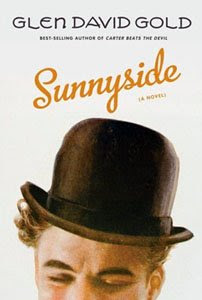 “A breathless stupendous novel that recreates both a young brash America on the verge of becoming itself, and Chaplin, one of its most bewitching quixotic citizens. From lighthouse to Hollywood to starlets to war to stardom to madness to genius Gold’s startling narrative carries us across the world and back. Gold proves himself yet again to be the hungriest craftiest funniest and most humane novelist we have.” –Junot Díaz - from Random House

Check out this link for Glen's book tour this summer.

I had a few request for reviews on 'Sunnyside', but in the end, readers need to find out for themselves. Sunnyside is now available for purchase. Also, check out Glen's tour dates above for an event near you.

UPDATE May 13: My copy of 'Sunnyside' arrived today! I ordered with free shipping last week, but they mailed it overnight yesterday. Except for the dust cover being bent up and folded wrong on the seam on the front cover, it came okay... Also remember, this is a NOVEL. A fictional story featuring Edna and Chaplin (and a host of others).
Posted by Edna's Place at 6:18 PM