The latest book from Lon and Debra Davis is
"King of the Movies: Francis X. Bushman" 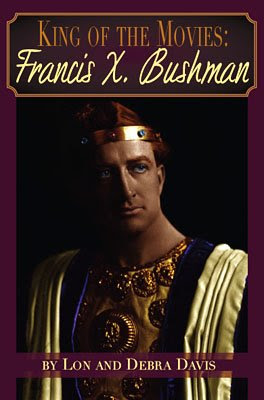 "Francis X. Bushman had a life like no other"
"He was the screen’s first great romantic idol, a bodybuilder, an artist’s model, a Broadway and stock company actor, a husband (four times), a father (six times), a dog breeder, a songwriter, a vaudeville headliner, a radio performer, a television personality, a senior citizens’ advocate. He lived an exaggerated life, both as a free-spending multi-millionaire star and a bankrupt has-been.

After all the accolades and criticisms, he was that rare kind of man who had no regrets. Working closely with Mr. Bushman’s widow, the authors were granted unprecedented access to the star’s heretofore-unpublished autobiographical notes, tape recordings and photographs.

Those treasures, along with hundreds of other reliable sources, laid the groundwork for this definitive look at the man known in his heyday as “King of the Movies.”" - from the author, BearManor Media

The release is scheduled for spring 2009 from BearManor Media. Watch for our updates. In 2008, Davis released "Silent Lives" and "Stooges Among Us".
Posted by Edna's Place at 8:40 AM