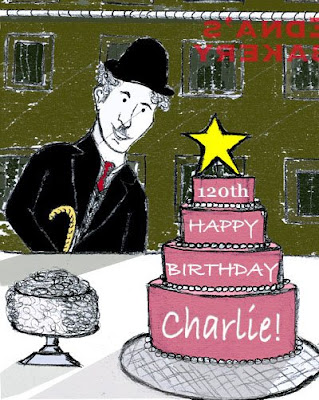 Born April 16th, 1889 - London
We hoped you enjoyed the TCM Charlie Chaplin Birthday Event!
Check this link for more Chaplin this April and May!

In the UK?
Check out Paul Merton's Silent Clowns Tour this spring

Also, keep an eye out, as Chaplin's Keystone film works are planned for release on DVD starting in the UK in the near future. These have been all restored and will be the very best collection of these films to date. You can learn more at BFI (British Film Institute) in London.

Lots of traffic today, as well, as the same old questions
Questions about Edna Purviance:
Edna Purviance in LIMELIGHT? Monsieur Verdoux?
NO... Edna Purviance was NEVER in Limelight or Monsieur Verdoux. Someone years ago started this rumor, because they didn't know about Edna's later years and what Edna looked like. The rumor has been around so long, it is now in books and websites about Chaplin. And it is hard to correct a rumor, once it starts. But after nearly 12 years of research, Edna's own family finally have cleared this up.

Lita Hill, Edna's grand niece, lived with Edna during the filming of Limelight and there were NO trips to the Chaplin Studio during those years. Edna was not in good health throughout the 1950s. Also, Edna was in the early stages of her long illness with cancer and other illnesses, as well. Edna died from cancer in January 1958.

As for the 'lady' someone thought to be Edna in Limelight, that woman in the film is quite tall (Edna was about 5' ft. 3" inches - shorter than Chaplin) and that lady had very different features.

I and Lita watched the Limelight film footage and Lita was very surprised to even hear of such a thing, being she was living in Edna's house the whole time the film was being made. She was even driving Edna, since Edna wasn't driving as much, anymore. There were no trips or even chats about any Chaplin films.

Same goes for the rumor of Edna in Monsieur Verdoux. Edna did try out for a part (and an eye witness thought she had a good voice and read the part well), but Edna was not comfortable working in front of the cameras. She was trained as a silent film actress. Also, for Chaplin, Edna reminded him of this early film day successes. He just didn't feel it would work out. It was Edna's last official business at the studio. For Edna's part, Edna was very relieved not to get the part. She never talked about it with the family, but only mentioned the try out to a film crew while visiting a student education film project in Reno, Nevada. (NO, Edna was not in this student film project, just visiting and picking up her grand niece.)

And again, as for the woman thought to be Edna in the wedding party scene, that woman doesn't match the images of Edna from the 1940s and is way too tall with the wrong body shape. (Lita also told me she knew Chaplin wouldn't even think of putting Edna in a bit part and Edna wouldn't consider it, herself.)

And it should be noted, one of the reasons Chaplin may have offered Edna a part in the film, was the fact he knew Edna lost her husband several months earlier to a sudden death. Edna would never fully recovered from the lost of Jack. Chaplin may have been trying to lift her spirits, by getting her involved with film work again. He knew how work always relieved him with his depression, and Edna was depressed about the lost of Jack. She was very happy, up until the time she lost Jack in June of 1945.

This information is from 12 years of my personal research into Edna and learning first hand accounts from her family members who actually knew her and lived with her. You will not find this information in other publications. Most books have repeated from the same former information over and over again, but never knew the full facts. I am currently working on the second book to feature Edna, which will included Edna's later years.
Posted by Edna's Place at 6:03 AM

This is a terrific post. I remember reading about the possibility of Edna in M. Verdoux and racing to the video to see for myself - I thought it was fairly obvious that none of the candidates was Edna. I expect these rumours will go on and on, but at least antidote (your site and blog) now exists.

I did the same, when I read that for MV and thought the same as you.

Of course, I asked Lita, and she was very surprised about the claim(s).

She did have fun looking at the lady picked out to be Edna:'Look how tall that lady is, and the body shape and face, all wrong', she said.

Anyway, it is in a lot of books now, and continues to live on, even though it is not true. But, who knows, maybe in time that will change. :-)

Thank you for finally clearing this up. I have always searched for Edna in the garden scene in "Monsieur Verdoux" and never saw her; also thought it odd that there were never any photos that surfaced of her in the movie. Looking forward to seeing MV on blu-ray though!

I'm working on a Chaplin-related project which in part involves Edna. This site has been extremely helpful in providing the basic biographical highlights, which I've augmented with other sources such as vintage newspaper articles and census info from ancestry.com.

Which brings me to a question: have you seen Edna Squire in the 1940 census? I have, and the information on the form raises some questions.

She and John were living in an apartment in Queens NY. The 1940 was the first census that listed annual earnings, and Edna's are listed as 0 for 1939. This would indicate that she was NOT on Chaplin's payroll during her marriage - which isn't surprising except that it's not been considered before.

The much bigger surprise is that it states Edna gave birth to one child (not stillborn).

There are other discrepancies: her age is given as 41 when she was actually 44, and it states her age at marriage was 26; she was actually 41 or 42. Other responses, such as the birthplaces of her and her parents are consistent with prior censuses (I have copies of all of them) and the actual record.

It's not clear on the form whether Edna or John spoke to the enumerator, and errors in transcribing are always possible - but the possibility of a child is very intriguing. Has this ever been addressed by Edna's family members?

Hello Michael,
Thanks for visiting.

Census reports, and even other legal documents, don't always tell the truth.

Edna's death certificate is one such example, with the wrong year of birth. Which leads people doing writing about her, using legal documents alone, end up making mistakes, and other people continuing those mistakes into more publications, as time passes.

The 1940 Census is messed up on the information.

The EDNA info in that extra bit, doesn't match Edna's. That is another person named 'Edna Squire' or whoever, someone at Census attached to it, while doing the original census report. I have no doubt about that.

Whoever put this report together, wasn't careful.

Even the parent info doesn't match! Let alone the age and child listing for that Edna S. That is a different EDNA, and a mistake in that report.

As for Edna being paid during those other years, I had questions about that, myself, for several years and had information that bring that all into question.

But I will be covering all of this in the Edna family biography, as I am still doing research on Edna, at this time, as I am writing the book. So not going further on more Edna information publicly, until I get Edna's book finished.

I find new things all the time, that changes what I thought was correct, and learning much more too.

No biography book is ever perfect, but just going to try and put the best record I can for Edna.

Again, thanks for writing.