Garen Ewing has asked his friends and Rainbow Orchid followers to help celebrate his 40th birthday today, by 'spreading the word' about his upcoming book The Rainbow Orchid (Volume One) being released in August 2009. 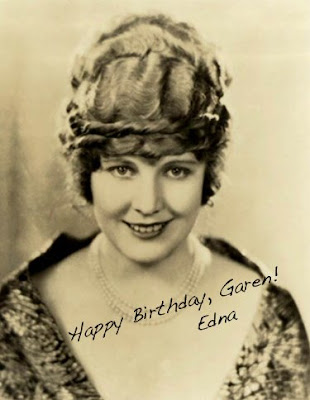 Now while I just posted Garen's audio recording (which you can learn more about his love for silent films and how it is a part of his work), I just want to point out to our silent film fans, The Rainbow Orchid would make a great gift for that person on your list who you would like to introduce to silent films. With two of Garen's leading characters in the silent film field, it would be a fun and unique way to do it.

So help a dear and special friend of ours celebrate his 40th Birthday, by spending sometime at The Rainbow Orchid. Have a Very Happy Birthday, Garen! And thanks everyone!

UPDATE June 18th: For Window users, I've placed up a new page with the audio file on Real Player.
Posted by Edna's Place at 12:01 AM