In early June, we were contacted by John Schwally, a New York veteran PBS producer and JFS Films documentary researcher and creator. Schwally is finishing work on a documentary called FDR's Secret Air Force. The reason we were contacted was because of this page we had about John 'Jack' Squire. Jack was Edna Purviance's husband from 1938 until his sudden death from a heart attack in 1945. 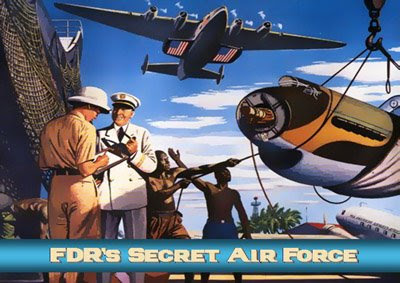 David Hartman (formerly known as host of ABC's Good Morning America for 11 yrs.) is narrator of the film

For 10 years Jack was a pilot for different divisions of Pan America Airlines and had flown for other airlines since his twenties. Jack was either captain or crew member on flights across the United States, Central America, South America and even to Great Britain.

Edna was with Jack during World War II, and they lived in South America. During the war, Jack and other pilots for Pan Am and other airlines functioned as a secret air force for United States President Franklin D. Roosevelt. Schwally’s documentary is about history quietly created by these commercial pilots in wartime.

Jack Squire does not appear in the documentary, but his work as an amateur filmmaker will be seen. Jack loved being a pilot, and he avidly filmed his trips to different countries.

Some of those films have survived and were digitally preserved by Leading Ladies in 2006. In FDR's Secret Air Force, parts of a 7 minute segment of his movies from the 1940s are planned to be part of the showing on PBS, Discovery or another network (details still developing).

(Note: This will NOT include the film images of Edna Purviance.)

Schwally has been working on this project since 2001, and has interviewed some of the last living pilots of that era. The documentary will illuminate an intriguing event in history.

We will keep you informed on the progress of this project. I know Jack (and Edna) would have been proud Jack’s films would be a part of this new documentary.


About some of the projects of veteran PBS producer John Schwally:
• Winner of two Emmy awards for PBS Nature, Adam Smith and PBS She Says Women in News

• Producer and writer for Battles B.C. for the History Channel

• Producing the aviation history documentary Across the Sahara

• Executive Producer of The Backpacking Experience for the Outdoor Life Network

LATEST NEWS
Schwally has been invited to present FDR film at Cornell and Rutgers Universities 'Re-Evaluating Africa and WWII' in September 2009.

Update note: The film arrived fine. I will report more, when I know more...

Update Aug. 26th: Learned Jack's footage is being edited in now, as the finishing touches are being made on FDR.

Update Sept. 19th: FDR is making the rounds and getting very good feedback! The film also has strong interest in the UK. More details as they develop.