The Rainbow Orchid by Garen Ewing has it's official Egmont UK launch this evening at the Foyles Gallery and bookshop in Central London. We send our congratulations and very best wishes for the success of his upcoming series of books about the adventures of Julius Chancer. 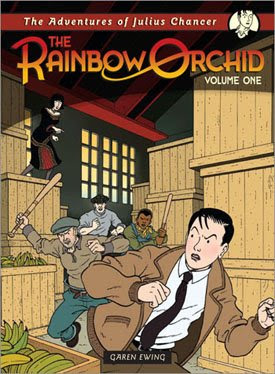 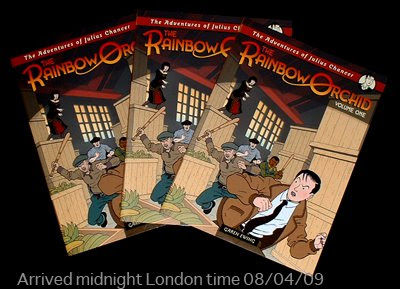 Garen's book is available now, at many UK and online locations, including Garen's RO shop. I am currently working on a short video presentation to our podcast interview launched in May. I will post when ready.

Update: A lovely report from the event this evening.

UPDATE Aug 3rd: On this night of the London launch, three Rainbow Orchids have just arrived in the post! Now I call that timing! Officially arrive at midnight London time, August 4th, 2009, the original release date for The Rainbow Orchid. 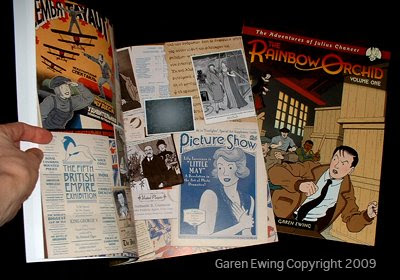 The drawing of Lily and Edna from RO was in the Gallery show at the launch.

To continue my Rainbow Orchid celebration a sneak peek of my book. I may have to take this image down, due to copyright issues, but wanted to show you another view of The Rainbow Orchid books that arrived at midnight London time, Aug. 4th (just after Garen's official launch in London).

Our girl Edna is on this page, with the charming Lily Lawrence. A wonderful surprise and a zillion thanks to Garen for including Edna in his wonderful book! (Which I just sat down and marveled at last night, too overcome to just read it at the moment, but I will.)

I have followed Garen's book being created since the fall of 2001, and know it has been a long and hilly road (with great highs and lows), but what an achievement for him, finally!

If you are interested in ordering from Amazon, these were from Amazon UK and USA. The USA order from The Book Depository was ordered just over a week ago and two from Amazon UK ordered in May (pre-release). Both arrived the same day in excellent condition. Be aware, when ordering from the US, UK prices do vary, due to the ever changing exchange rate. (Note: if you live in the USA and like to save on shipping, The USA Book Depository website has the Rainbow Orchid locked in currently at a US dollar price, with FREE shipping.)

Really looking forward to seeing some items from Garen's Rainbow Shop, which just fully opened on Sunday, August 2nd. I will share those, when they come.

Learn more about The Rainbow Orchid at Garen's website. Also, on my podcast interview with Garen, I have links to the latest reviews and interviews. I am working on a short video for the podcast as well. 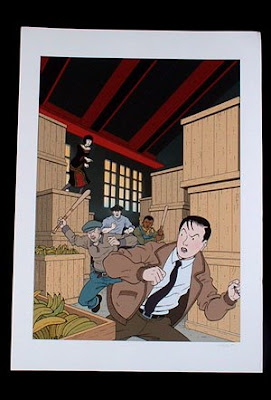 Update Aug 4th: My giclée print orders has arrived from the Rainbow Orchid shop! (Top and bottom) The images are digitally printed on archival paper. They have a high quality, poster board thickness and feel about them, with no gloss, at all (a bit like a filter based photo print, flat surface). Beautifully done! They are available through The Rainbow Orchid shop. Next to come, T-Shirts! (Update: The T-Shirts have arrived! And I like them so much, I made a special post.) 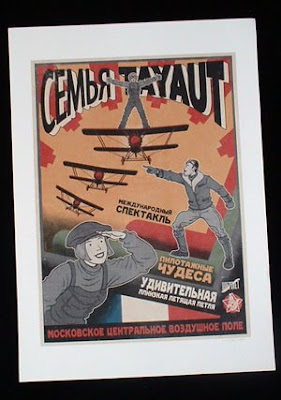 Update Aug. 8th: I have really enjoyed seeing Garen's book get some really good numbers on sales this week. While it always changes, Garen's Rainbow Orchid book has been in the top 100 bestsellers for comic graphic novels under Amazon UK for three days in a roll (I saw it as high as #18). And I should note, if you haven't read it here yet, Edna is pictured in this book with Lily Lawrence (Garen's leading lady and silent film star.) So if you are an Edna fan, I say, a must for your collection.) Garen used to run the Chaplin UK several years ago, so a longtime Chaplin, Edna and silent film fan.

Update Aug. 8th: I have read some exciting chatter for Garen's next two books, featuring Part 2 and 3 of the continuing story about The Rainbow Orchid. Please be patience, they are coming, but it does take time. They are not ready to fly out to the press, but much work goes into creating this wonderful story! At this moment, mid and late 2010 are the dates planned, but dates can change, so please be patience, there coming.

Update Aug. 9th: Here is a video interview in London during Garen Ewing's The Rainbow Orchid book launch at Foyles Gallery on Monday, Aug. 3rd. The program is Fantastic Realm with Iyare (comic book program). The program is 9 minutes long and Garen appears about 3:36 minutes into the video for a short interview segment in the gallery. (Note: I do know now, Edna's picture from the book was included in the Gallery show.)

One of my books, I am planning to setup in a library. Details to come.