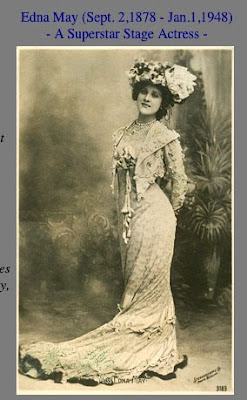 New website about
Stage Actress and Singer
Edna May
While on a trip, Charles Pascoe came across a postcard with a stamp he liked for his stamp collection. But in time, the picture on the front of the card grabbed his attention even more. With research he learned it was stage actress Edna May.

Edna May was born in Syracuse, New York. She started her stage career in her hometown, before moving to New York City in the mid-1890s.

After a while, she landed a role in the Broadway production of "The Belle of New York" which in time, would send her to London with the same play production.

In London, the show became a hit and made Edna May a star.

Her career continued into the 1910s on stage and she even played in a few silent films before retiring.

Edna May is Charles Pascoe's first website about the star and he plans to add to his site overtime. His research into Edna May is for the love of doing it (the same as Edna Purviance.org began). So we thank Charles for letting us know about his site and we hope you enjoy watching his site grow in the coming years. Link to Edna May

Image from Charles site.
Posted by Edna's Place at 10:13 AM