The family home of Courtland Dines

In the summer of 1923, Edna Purviance met Courtland Dines in Los Angeles. He was the son of a wealthy pioneering lawyer family from Denver, Colorado. Dines was at the end of his first marriage, and was looking to start a new business in oil, when he met Edna.

The couple were rumored to marry, but this affair was all very quiet and private, until the driver for Mabel Normand, a friend of the couple, shot Dines at his Los Angeles home on New Year's Day, 1924, while Edna and Mabel were in the house.

Dines didn't die, but Edna, especially Mabel, took a hit from the press, as news of the shooting screamed into headlines around the world. Edna's film, 'A Woman in Paris' was doing good box office at the time, and even greatly better, in cities, after the shooting, as curious people wanted to see Edna (my finding has disagreed somewhat, with published works over the years about the box office of Paris). But the shooting cause some theatres to ban Mabel films and suspend Edna's 'A Woman of Paris' film in a few states in the US. (Edna's earlier films fared better in part, because Edna's earlier work with Chaplin was hugely popular, and theatres were not ones to lose Chaplin and the money it created.)

After about five months of hearings, the shooter, Greer, was not charged after the very short lived trial started in June 1924, as everyone involved wanted the matter to be placed behind them. But during the trial, Dines didn't show up, as he was called home to be with his father, who was seriously ill, just as the trial start.

So where did Dines go home too? It was his family home in Denver, Colorado, in the Capitol Hill district of Denver.

Dines lived only about a block away from the famous Molly Brown. (If you see the movie with Debbie Reynolds, you hear 'Molly' talking about her neighbors, well in real life, the Dines WAS one of Molly Brown's real neighbors.)

What happened to the family home of Courtland Dines?

I recently had a chance to see his family home on a quick business trip that passed through Denver. I only got to see the outside, but noticed the sign in front called Starkey Institute.

Seeing the name Starkey I thought hearing aids, but later, looking the name up on the web, I found something totally different.

Starkey Institute is the home of what is called the only household management institute in America for the jet set (I don't know if that is fully true, but that is what people report).

In its hey-day (before the bubble popped), the institute sent students to jobs around the world.

While the jobs are fewer now, the rich still are looking for the best trained staffs to run their homes, so Starkey Boot Camp is the place students have a chance to train for this special field.

Just find it interesting to learn Dine's family home, where he knew up, still exists today and serving the wealthy. Their on site video shows scenes of inside Dines home (of course different, somewhat, from Dine's day), but the outside basically the same (brick and stone were very popular building material in Denver). 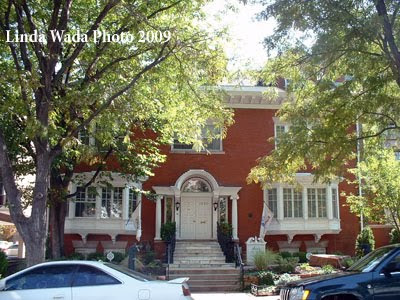 I have an earlier photo of the home showing few changes.
I doubt Edna ever visited this home, since Dine's parents were not keen on their son having an actress as a girlfriend, but interesting to see a bit of the past associated with Edna, still existing and in use.

A CNBC report about the Starkey Butler Institute:


Here is Starkey's website for a full array of videos about the training at the center (nearly all done in the Dine's former home). Very interesting to see the 'high powered' training students get here.

I don't know how Starkey is doing now in placements, as the high flying days of the growing household manager field is on the decline, as the wealth bubble has deflated. The luxury of having butlers, maids, even full-time gardeners are on the decline, as this 2008 WSJ reports.

But if you are interested in the field, certainly a place to check out.
Posted by Edna's Place at 9:05 AM