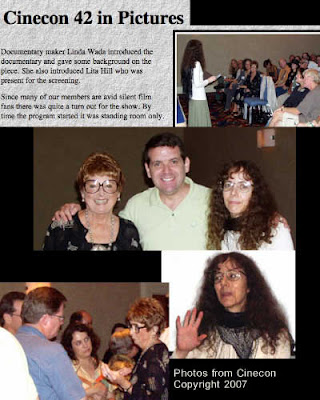 Cinecon 43 is getting ready for their Labor Day event starting the end of August. Presently, they have the photos from last years Cinecon 42 event, which includes our special Edna Purviance event, with Lita Hill as special guest.

"Since many of our members are avid silent film fans there was quite a turn out for the show. By time the program started it was standing room only." - Cinecon

We like to thank Cinecon for the report. Check their site for the coming schedule for Cinecon 43. more>


UPDATE July 18th: I had this question today about the documentary from a fan in Canada:
"I would like to know if it will be possible for fans far from Hollywood (Québec, Canada) to see the film?"

I had many others asked this question too. We nearly had two showing on the east coast this year, but the events didn't work out. I do have others very interested, but nothing is set yet. It does take the right event, but interest has been high, so we thank you for that. I will have more about the film in the future.

Right now, we are trying to finish The Sea Gull, which will be the very first book to feature Edna Purviance. Due to new material since the first planned book, it had stretched out the time on the current project, but we all feel for the better! I am also working on the second book, which is the biography on Edna.

The discovery of the private films of Edna has opened the door to much more research, and that all takes time. At the moment, along with Sea Gull, I am working on cataloging all of Edna's personal items. This is helping with both books, but also takes a great deal of time. Thanks again for everyones patience and support...