On July 4th, 1899, Edna Purviance was three years old and enjoying her first Fourth of July in Lovelock, Nevada. The family moved to Lovelock in November of 1898, where her parents leased The Singer Hotel.

By July 4th, the family were very settled in their new town and were part of the Fourth of July celebration, as Edna’s sister Bessie and mother Louise, sang at the special day long event. Being three years old, she wouldn’t remember much about it, but she met her uncle William Purviance for the first time, who was the oldest brother of Edna’s father Madison. 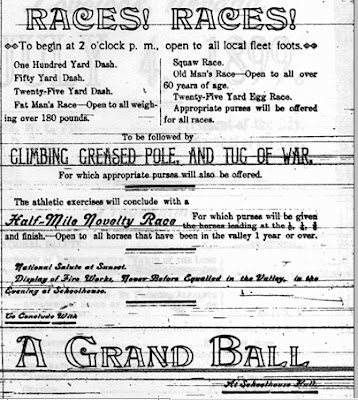 The day was filled with events everyone in the Big Meadow Valley shared in from parades, horse races, a series of fun races for young and old (tug a wars, egg races, slippery pole climbs, etc.) followed in the evening and well into the morning of July 5th - a grand ball (dance with live music) and dinner.

Below is just a ‘taste’ of some events held on Edna’s first 4th of July in Lovelock, Nevada.

The Fourth of July in Lovelock - 1899
Lovelock Nevada - Lovelock Tribune

“The Fourth was a gala day in Lovelock. It was one long round of pleasure from the first firecrackers in the early morning till the last strains of the music in the ball room died away in the dawn of another day.

Grand Marshal of the Day Grannis with appropriate sash and decorated horse was on hand to lead the parade and a respectable turnout followed.”

“It was high noon when the crowd was assembled under the big trees in the Ruddell Grove. It was the enjoyment itself to sit in the shade with the cool wind blowing through the leafy boughs. Mr. Ruddell had carefully laid fresh-cut alfalfa over the bare places left by the burning of the old houses and one walked as on a carpet. Strong planks gave ample seat room. The children romped in a big awing nearby. The lemonade and ice cream stand offered refreshments to all. It was a regulation picnic ground and a more suitable place would be hard to find in the valley.”

“A pleasing interlude at the picnic was the singing of the “Lost Ship Maine” by Mrs. (Louise) Purviance and Miss Bessie Purviance.”

“C.H. McIntosh as orator of the day, spoke against expansion. He contrasted the glories of the flag in the past with the war now going on in the Philippines.”

As an added note, Charlie Chaplin was on tour with the Eight Lancashire Lads in 1899. By July 1899, he was on his seventh month with the group that begin touring in late December, 1898.

Footnote: In the ad, it mentions 'purses will also be offered'. In case you didn't know, a 'purse' was award money given in the form of usually gold dollar coins, presented in a leather pouch. In the case of pole climbing, a $3 purse was placed on the top of the pole. The first person to reach the top of the pole won the price. Today, $3 might buy a cup of coffee and a newspaper. In 1899, it represented two days worth of wages, working a good 10 or more hours each day in the haying fields.
Posted by Edna's Place at 6:59 AM