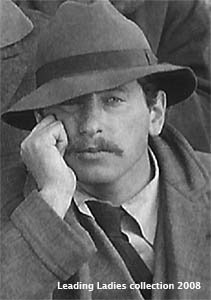 Il Cinema Ritrovato
Bologna, Italy
June 28-July 5, 2008
Josef von Sternberg
The film work of Josef von Sternberg will be the main event at the 2008, IL CINEMA RITROVATO. Many of Josef's films will be shown and I have even learned a presentation on The Sea Gull is on the schedule. Link to full schedule.

From the information released:
"The most spectacular presentation is dedicated to Josef von Sternberg, "the inventor of Marlene Dietrich" – all six American Sternberg-Dietrich films will be shown - and before that the creator of a fabulous silent oeuvre which we will show in too.

The Salvation Hunters (1925), his first film presented in a new print splendidly preserved by UCLA, is already a supreme naturalist illusion that reveals the force of an unsurpassed stylist and the strangest of cinema's poets. Underworld (1927) is the first of Sternberg's four films dominated by the unforgettably wild presence of George Bancroft.

The Docks of New York (1928) is a towering pictorial masterpiece, and the print we show should make any film lover's week or even life worthwhile. The Last Command (1928) is a perfect match between the ironies of Sternberg and the story itself: a general from old Russia is now a Hollywood extra.

In Sternberg's terms we might wonder which one - a man's life or its imitation - is the true parody? This retrospective will be completed by Thunderbolt (1929), Sternberg's first experiment with sound. 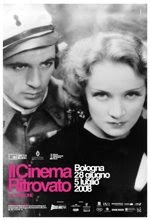 The Marlene Dietrich films Morocco (1930), Dishonored (1931), Shanghai Express (1932), Blonde Venus (1932), The Scarlet Empress (1934) and The Devil Is a Woman (1935) open the gates to a dream scape that might take place in China, Imperial Russia, North Africa, Austria or Spain with Dietrich as a spy, adventuress, singer, and Empress, which gives her the opportunity to cut the throats of her men.

These films represent the highest point, perverse and ruthless, of the mythology of the love goddess. But that’s not all. We'll show some rarities: Children of Divorce (1927), partly directed by Sternberg, and his vastly under appreciated An American Tragedy (1931).

And there will be two dossiers curated by Janet Bergstrom in collaboration with the UCLA Film & Television Archive, with the participation of the director's son Nicholas von Sternberg and a vivid portrait of the artist himself interviewed by André S. Labarthe, the creator (with Janine Bazin) of the famous interview series, Cinéastes de notre temps, to which we dedicate a special homage."

UPDATE: I JUST learned too that The Sea Gull/A Woman of the Sea will be talked about at this event:

"At the crossroad of the Sternberg retrospective, we will dedicate a dossier to The Seagull/Woman of the Sea (1926), one of the most famous “lost films” of all time.

The film was shot by Sternberg and produced by Chaplin who did not like it and eventually refused to release it. It’s intriguing story will be traced with images and rare documents gathered from many sources."

For readers who was interested, here is a link to a brief video featuring images and the book about The Sea Gull.

And finally, for Charlie Chaplin fans an added event:
"While last year’s Chapliniana still echoes in our minds, this year we will launch an annual "Chaplin’s filiation" program with a series of films devoted to Monta Bell, Chaplin’s assistant on A Woman of Paris (1924) and a wonderful director in his own right, as our selection - Lady of the Night (1925), Pretty Ladies (1925), Upstage (1926) - proves beyond question." - Cinema Ritrovato 2008

If you are a fan of Josef von Sternberg, and can afford to get to Italy, it is certainly an event to see. Bologna is an enjoyable city to visit, and very easy to get around by walking. Learning some Italian before going does help.

UPDATE: We have been in contact from Italy about the festival and the special program about The Sea Gull.

(Josef von Sternberg was the director and creator of The Sea Gull 'Woman of the Sea", produced by Charles Chaplin. Leading Ladies publishing released the first book about the film by author Linda Wada on January 13, 2008. You can learn more at ednapurviance.com. And for my regular Edna readers, who have asked, I just learned about this event April 11. The Sea Gull presentation, I actually didn't learn about until April 12. But it sounds like a great event for Josef von Sternberg fans to attend.)

June 9, 2008 - Leading Ladies has shipped some copies of The Sea Gull for this event. We also have been in contact with the festival, as a dossier is planned for The Sea Gull during the week long event.

And if it was used, we hope parties giving presentation have properly credited there sources.