Los Angeles, California - Hollywood preservationist, Robert W. Nudelman, has died at the age of 52. Robert was visiting his father in Arizona, who was recently ill, when Robert died suddenly at his family home. He was best known for his work saving landmarks like El Capitan Theatre and Cinerama Dome. He was also involved with Cinecon, where we met him in 2006. 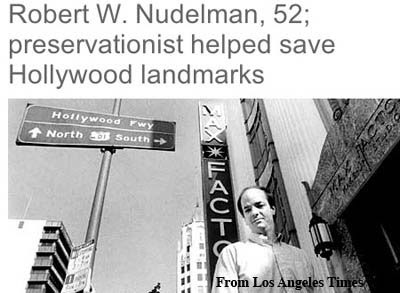 The Los Angeles Times reports:
"In 1984, Nudelman and a group of investors launched the Hollywood Museum, a small memorabilia showplace in an old bank building on Hollywood Boulevard. It attracted about 10,000 visitors before going broke a year later. He was the longtime director of preservation for Hollywood Heritage and had served as president of the group. He also was curator of the Hollywood Heritage Museum in the Lasky-DeMille Barn and had written several books about Hollywood. Friends invariably mentioned his wry humor, his humility and that he didn't own a car. At the time of his death, he was working with Debbie Reynolds and her son Todd on the Hollywood motion picture museum she is building in Tennessee."

"We want to turn the lot into a theme park," said Robert Nudelman of the Hollywood Group. "We could rent it out to movie companies occasionally."

But the response was not enthusiastic from the film industry, Nudelman continued:

"I've talked to the people in the movie industry and their reaction seems to be 'Who cares?' - LA Times

Plans are in the works for a special memorial. Check this link for very good report from Cinema Treasures about Nudelman. more>

May 19th - Here is a link page of more information from Hollywood Hertiage.

The best memorial we can provide for Robert Nudelman is a vigorous, well-targeted preservation effort that spans the 21st century.

Don't let him (and ourselves) down!

That would be a good plan.

But I do believe preservation needs to be taught to younger people, as well, in a way they can understand.

If they don't get on board, it makes it harder for the next generation to care on.

I clearly remember being introduced to the past, from the earliest age, with visits to old towns, museums, taking stream train rides, seeing old ships, etc.

I still remember my country schoolhouse, with the rail seating. And going to the traditional movie theatre with the beautiful interiors. Wow!

Nothing like the 'cold, plain boxes' we have now days. It made going to a movie, an event.