May 13, 2008 - US Pop Artist, Robert Rauschenberg has died at the age of 82. I remember seeing his work in San Francisco, during our college art trips in the 1980s.

On one of those trips, while roaming the old record shops, we picked up the album 'Speaking in Tongues' by Talking Heads, which the cover was designed by Robert Rauschenberg.

In 1984, he won the Grammy Award for best album cover for that same cover (see image). It is still sealed and in the same bag it was purchased.

Cost $15. That was a large amount of money for an album in those days. 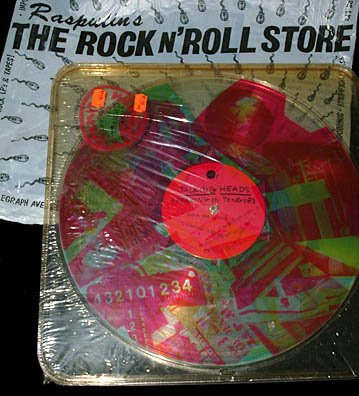 Okay, I do have an Edna Purviance tie in to this. Edna use to stay at one of her relatives homes not far from where we bought this LP. It was the same home her stepfather, Robert Nurnberger died in 1911. From records I have at the moment, the property was taken over by University of California. This property could have been purchased about the time Sidney Buckingham Hill (Bessie Purviance Hill husband and Edna's brother-in-law) attended the University.
Posted by Edna's Place at 1:15 PM