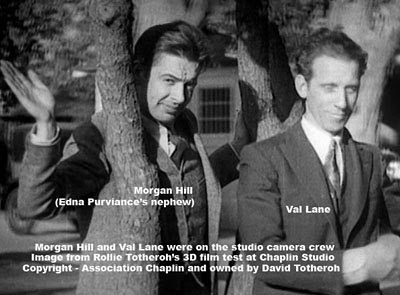 Morgan Hill worked for Charlie Chaplin starting sometime in 1927 through 1939. (He started to work for Chaplin during the filming of The Circus and worked full time starting in 1928, from the information we have in the Hill collection.)

Morgan use to visit the studio when Edna Purviance was still working there in the early 1920s, clear up to the time when she was filming The Sea Gull "A Woman of the Sea" (in 1926).

Morgan was assistant to Rollie Totheroh during filming, and worked in the studio film developing lab. He used is mechanical talents in repairing film cameras on site, and even invented unique equipment, used in the film industry.

You can see this clip of Morgan in The Chaplin DVD Collection from Warner Brothers. If you have the two disc DVD of The Circus, in the MK2 collection, look up the extras on Disc Two. On the menu, you will see a listing for DOCUMENTS. Click on DOCUMENTS, and you will find a listing for 3D camera test footage.

The footage opens with cameraman Val Lane by a tree. Walking up from the background, is Morgan Hill. The two do hand movements in front of the camera.

It was just an experiment, but interesting to note Chaplin's camera crew were creating 3D, never realizing their boss, one day, would be re-created using that technique for future audiences to enjoy.

This film clip is own by David Totheroh. We actually met David in Hollywood during our Cinecon event. He came especially to meet Lita and see our event. He didn't know Morgan, but remembered an old family joke, concerning the fact, Morgan had a town in California named after him, called Morgan Hill.

Of course, it adds a bit of a problem researching Morgan Hill, on a database, as the town shows up often in searches.

If you don't have the DVD, it is still available from private sellers. The Chaplin Collection DVD set from Warners has been retired. I don't know if this clip will be added to future Chaplin DVD collections, so if you like to have it, should probably get one now, before the price goes higher. It has been increasing in price.
___________________

Added Notes
Morgan Hill was the father to Lita and Ellie Hill, and was the son of Bessie Purviance Hill and Sidney Hill. He was Edna's close friend and pal, while growing up in Nevada. Morgan was seven years younger than Edna, and would remain close to the family his whole life. He use to live with Edna, from time to time, in the late 1910s and early 1920s, until he married his first wife Jean. Jean and Morgan would visit Edna on the set during the time of Edna's last films with Chaplin.

Morgan and his second wife, Helen (Lita and Ellie's mother), helped Edna get into the Motion Picture Home, during Edna's serious illness with cancer in the 1950s.
Posted by Edna's Place at 10:04 AM