The Sea Gull book is ready to order!

The Sea Gull is BACK!
And ready to order NOW! 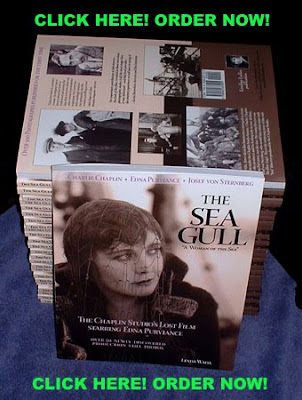 The Sea Gull is only available through Edna Purviance .com
This is our Third Revised Edition
and back to our original 2008 release price,
thanks to our new printers.

Update: Live in the San Francisco Bay Area? We now have books at the Niles Essanay Gift shop.
Thomas Gladysz - Writer/Reviewer - San Francisco Examiner
"Had you not known it was self-published, any reader would assume this book the product of a major concern. It’s beautifully printed. The layout is attractive, and the text is informative. And what’s more, it’s the only book on an interesting and worthwhile subject... Obviously a labor of love, this fine book is an appealing look into the past." - Examiner, syndicated nationally, USA

Kevin Brownlow - Silent Film Historian - London, England
"THE SEA GULL is an important contribution to film history, and worth buying for the stills alone. The look of the film, revealed in these marvellous photographs, makes it all the more tragic that it was destroyed. This book provides the nearest experience we will have to seeing it. Thank you for all the hard work. It is much appreciated."
John Baxter - author - Paris, France
"Thanks for sending THE SEA GULL so promptly. It's a fascinating piece of research - particularly since von Sternberg has been almost a lifelong interest. My most sincere congratulations."

Some The SEA GULL Information from the current research
Here is what I found about the titling of this film:

1) The original working title of this film was THE SEA GULL (no 's' on the end). This was used during production (January until mid-June, 1926).

2) On June 19, 1926, The Los Angeles Times reported about an interview with Josef von Sternberg on his new film. It was called "A WOMAN WHO ONCE LOVED." It was being made at the Chaplin Studio.

3) Written in the official FILM WORKING SCHEDULE: Four days after this report was printed, it was noticed in the SCHEDULE the titles were changed.

The film that previewed was called "A WOMAN OF THE SEA."

As the research goes on, learn more now from this nearly forgotten film production of Charlie Chaplin, directed by Josef von Sternberg and starring Edna Purviance.

UPDATE: Thanks very much for the orders, to date. All processed orders will be placed in the post today. Check your emails for details. Thanks ever so much for supporting this project.

Update Feb. 17th - Many thanks, again, as more orders have appeared today! Check your emails to confirm addresses, etc. Nice to see all these overseas orders, as well! Again, thanks for everyone support, worldwide!

Update (follow-up on Feb. 17th) - We have all our current orders in the mail. Thanks to everyone in the UK, Europe and USA for your orders. Check your emails for details on your order.

Update March 7th - Here is another updated article about The Sea Gull.