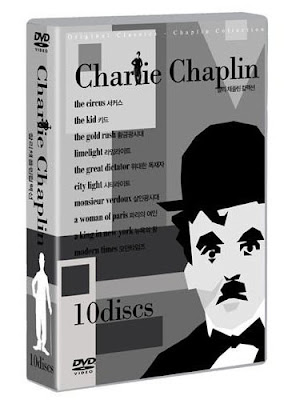 If you seen this DVD set (image) on Amazon, you should know it is an illegal DVD set. Don't buy!

UPDATE: This collection appears to be removed from the Amazon US listings.


COPYRIGHTS ON CHAPLIN FILMS
There are always fans who don't seem to know this, so a reminder on the Chaplin list of copyrighted films.

All Charlie Chaplin Films made from 1918 onward, are copyrighted by Roy Export. Starting with Chaplin's First National contract, he had full control and copyright of his films. These films are:

These are NOT in the public domain, but during Chaplin's days in Hollywood, a few of these films were pirated from Chaplin, and today, show up in a few unofficial sets. Today, as in Chaplin's time, pirated collections are removed, like this pirated set pictured. Currently, the official Chaplin collection will be released again in the future. In the meantime, do not spend your money on pirated copies.

Mutual - 1916
The Floorwalker
The Fireman
The Vagabond
One A.M.
The Count
The Pawnshop
Behind the Screen
The Rink

1917 releases
Easy Street
The Cure
The Immigrant
The Adventurer

After The Adventurer, Chaplin signed with First National and built his own studio, which he made all this films from 1918 until 1952. All the films made at his studio were copyrighted by Chaplin.

The best of the Essanay and Mutuals collections are with IMAGE ENTERTAINMENT or with BFI if you live in the UK. There is no best for the Chaplin Keystones on DVD, yet, until the newly restored collection is released. Learned more about the Keystones at this link.

Follow-up: A buyer of this set reported today, the casing fell apart, above opening. A picture was left on the site to see.
Posted by Edna's Place at 7:45 AM