The Sea Gull book is now launched! Thanks for the overnight orders. Now for a bit of "Magic Fun" in Tenerife (Canery Islands, off the coast of Africa), with Charlie Chaplin look alike. And I say, he is quite good!

February 17, 2010 - Wanting to keep The Sea Gull info on top for a bit longer, I will place this update here.

BBC 2 Radio re-broadcast of David Puttnam's Century of Cinema Episode 5, is now available to listen too for the next six days. To mark this event, when I was listening, I did this little drawing during the broadcast. This weeks program covers British film making. Episode 6 will be on next Tuesday, February 23nd. LINK 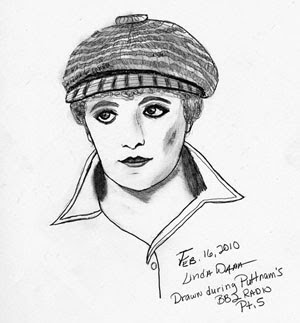