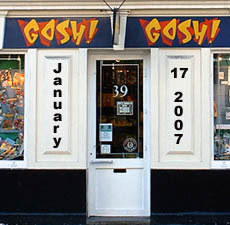 Next Wednesday, January 17th, I will announce special news about Edna Purviance. It will be posted around midnight west coast time in the USA. (That is around 8AM London time.)

Until than, just a bit about The Sea Gull book project. I am currently working on the re-writes and we are preparing the first test printing of the book.

It is great to see the layout coming together. So there is hope for getting this done! And we got some very good comments from our test readers.

Who were our test readers? They were selected from a group of people we have actually met and have experience in writing. Some of the readers were new to Edna Purviance, but this helped with introducing Edna to her ever growing list of fans.

We also like to thank the continued interest in the project and new entries to the contest to win a free copy of The Sea Gull. Those entries alone tell us Edna has fans in many different parts of the world.

Picture Note: The photo is one I took of Gosh! comic bookstore in London. Close to the British Museum. A must stop for comic book fans!
Posted by Edna's Place at 4:11 PM