Silent Film Events and Festivals
While there are thousands of film festivals, with some showing a few silent films, this is a list of silent film festivals and events. Even these may show some talking films, but I tried to keep this list on just silent film events and ones with currently updated schedules.

Bologna, Italy
IL CINEMA RITROVATO - June 30th - July 7th, 2007
30th Anniversary celebration since Charlie Chaplin's passing is being planned during this year's festival, with a major showing of Chaplin's films with live music and special exhibits of his work. 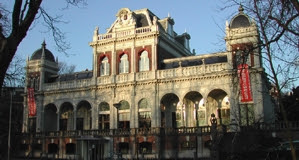 Hollywood
Cinecon - Labor Day Weekend (first weekend in Sept.)
Mixture of silent to 1950s films.
(Cinecon 43 - If like in the past, they will have the 43 program schedule on their site this summer. )

Events in dark gray are past events.

Update May 11, 2007 - I decided this spring to create a new home for this page on Edna's site. Here is the LINK. Thanks for visiting this page... L