We send our best to all our readers in the Southern California Wildfire areas.

Wildfires Hit Malibu - Malibu Castle Burned
October 21, 2007 - Malibu has been hit with wildfires and very strong winds this morning. Burning out of control, the fire has burned to the ground structures including a church, animal hospital and a fame landmark in Malibu known as the Malibu Castle (Castle Kashan), which overlooks the area and close to Pepperdine.

British Star Deborah Kerr dies at the age of 86
October 18, 2007 - Born in 1921 in Scotland, one of her most remembered roles is in "The King and I". You can check the following link for story and clips from her films from the BBC. - more> 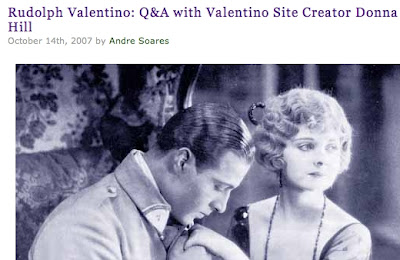 October 15, 2007 - Interview with Donna Hill from Stolen Moments about her upcoming book on Rudolph Valentino. more>

Also, Donna has an update on her October 18th podcast of upcoming shows, including the interview with Kevin Brownlow about Louise Brooks.
Posted by Edna's Place at 7:10 AM