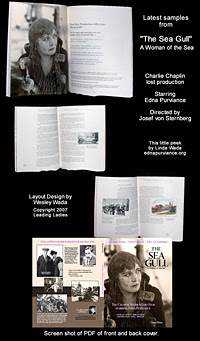 I finally got the time to get a few images together of the latest proof book. I didn't have a nice model with beautiful hands to hold it, so worked around that.

We were very busy with work and getting the second proof book ready. We did have to make some changes in the business end so had to make changes on the cover.

The cover image shown is actually the latest version being printed now. The inside layout had been adjusted on the newest version as well, but getting very close to the end product now. We have also started the work on the hardback edition, it has to be set up differently than this paperback one. It will be proofed, as well.

The large image is part of our latest Brief Glimpse, with some additional information. Again, thanks for every ones continued interest in the project.

Also, nice to see a bid on the auction and thanks for your emails.

Oct. 23. - We have had questions about how to buy The Sea Gull. It is not released just yet, but it is on schedule to be on sale this year. Just come back and visit! We are working on the final stages of all of this right now, just takes some more time to sort it all out...

Below see our October UPDATES
Posted by Edna's Place at 1:02 PM

I want to buy a copy of the book. Wow wonderful...

Hi Francine,
We are in the final stages, but it slows down, as we wait for things like proof books, etc.

We are planning a few different options for people to buy a book so that is all being set up right now.

We are getting there, and I should have a release date as soon as a few things are finished.

Keep checking in! When it does happen, it will happen pretty fast!

Thank-you for your continued interest in The Sea Gull,