A few minutes at the Chaplin Conference

Here are a few minutes behind the scenes at the
Charlie Chaplin Conference
in Zanesville, Ohio - October 2010
LINK 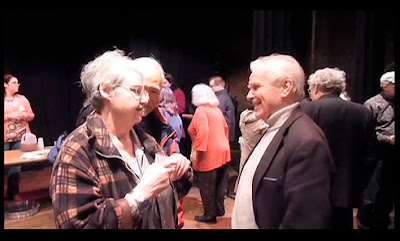 A little feedback off the web:
1) A comment my husband found on the web from a new fan of Chaplin.

"Linda Wada presents her labor-of-love film about Edna Purviance. The film features an interview with Lita Hill, Edna’s grand-niece. In her barn owl eyeglasses, Lita is quite a character. Even though she was in her late 70’s when the film was made, she’s clear and thoughtful. She visited her Aunt Edna often as a child, and lived with her for several years as a teenager. They’re second-hand stories of Edna’s life, of course, but interesting in spite of that." - Scott Cameron

Follow -up: First off, Lita live with Edna from her late teens to early 20s, until Lita married in the mid-1950s (and even off and on, after she was married). She also spent much time with Edna as a child, and even visited her in the 1940s in San Francisco (parts of this was removed to keeping the video to one hour and make room for adding new film footage of Edna). I don't think this new fan realized he saw Edna in her later years for the very first time, and in colour, since this was the very first showing of the footage of Jack's.

The glasses Lita wore in the interview were her on choosing. Lita loved a bit of flair, as special glass frames showed. But, over the course of filming over three days (one hour each day), or even between breaks, Lita would change her glasses to her wire ones. We were not interested in fashion, but only talking about Edna, so left her choose whatever glasses she wanted to wear, and she felt comfortable in. That is all that mattered.

Just glad Mr. Cameron came to the conference and enjoyed the 'Angel from Nevada' presentation. There were many events to see, so very happy he took the time to see ours. Thanks, Mr. Cameron!
Posted by Edna's Place at 8:21 PM

I think the Chaplin Conference was a great event. Everybody learned something new, we made a lot of friends, and we had fun.
Looking forward to another event like this.

Glad to hear you enjoyed it!