While I am still waiting for manuscripts to return from our reader panel, thought I remind anyone interested in The Sea Gull contest, that the form for entering the contest will end without warning on Edna's site. This is so I prevent lots of last minute entries and give the fans who signed-up and have been patiently waiting, a better chance in winning.

Also to give you an idea who is interested in Edna, thought I listed a few of the countries that have entered so far. There are many entries from all over the USA, but here is a sampling of the countries of other fans who have entered from around the world: Germany, United Kingdom, Peru, Czech Republic, Sweden, Canada, Belgium, Croatia, Austria, Deutschland, Brazil and Philippines.

There are more, but like to thank everyone interest in the project. Lots more to come, so stay tune... Update May 23, 2007 - Final manuscript will be back this holiday weekend, so final work on the book will continue very soon! 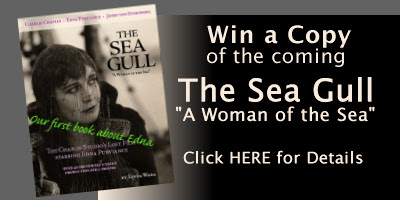