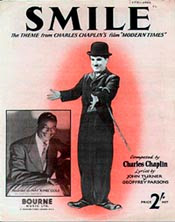 Chaplin wrote the music for his 1936 film Modern Times. It was the theme for the film and used beautifully at the end, but Charlie Chaplin did not write the lyrics.

In 1954, John Turner and Geoffrey Parsons wrote the lyrics to Chaplin's composition. Nat 'King' Cole was the first singer to record Smile with lyrics. It became a big hit for him and reached #10 on the Billboard Charts in 1954. It has been a standard ever since. Even Robert Downey Jr., (who turned 42 today) sang Smile for his Futurist CD collection. (Robert played Charlie in the movie CHAPLIN).

As for last night America Idol singer Gina Glocksen, reports are she impressed two of the judges. A fan of the show wrote:

"Charlie Chaplin wrote “Smile” for his film Modern Times, and it proves what an amazingly talented man he was. What a heart-wrenching song for a man who made his living making people laugh. It was a perfect choice for Gina and really showcased what a great singer she is."

(Unfortunately no smiles for Gina, as she has been voted off.)