The Chaplin Society of Japan

We like to send our special thanks to the Chaplin Society of Japan for all your support of Edna Purviance and The Sea Gull this past year. 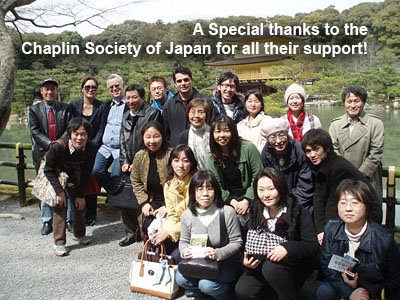 Chaplin Society Members. Photo from Shunichi Ohkubo. UPDATE: Shunichi has informed me that the group is in front of Kyoto Golden Pavilion Tempre. Also in the photo are Mr. and Mrs. Eugene Chaplin and author Hooman Mehran.
Edna's fans in Japan, have been visitors of Edna's site(s) for many years, which Edna herself, would have been very pleased with. Edna had many fans from Japan in her film days. There are still fan letters from Japan in the Hill collection. We will be sharing a few of these early day fan letters in future projects.

Thank you, everyone! We feel very honored to have your following!

Highlight about this year Chaplin's event: Shunichi exhibited 420 photos from his own collection as part of the festival. It was very well received by all who attended (and as a fan myself, I would have loved to have seen them). We look forward to hearing more about their future events.
Posted by Edna's Place at 7:29 PM