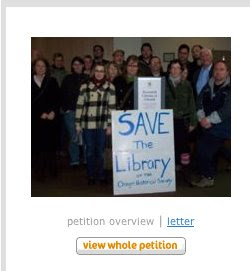 Another sad event, because of the current turn down. The Oregon Historical Society is closing there research library in Portland, Oregon.

I used this library myself, in researching the history of Charlie Chaplin during his Karno Tour in Portland, Oregon. Even at that time, nearly 10 years ago, the library was having trouble with funding.

We also had a cousin who worked in the library for several years in the late 80s and early 90s, and heard the inside story on the problems with funding. So this news is not surprising, but probably the norm, as we read of more closings around the world.

The Society is asking for help and placed together this special web page, at this link, to a special petition to sign. Below is information from that page.

We know it is not easy, with many people just trying to keep a roof over their head and a job to pay for it. But they are seeking 1000 signatures, so if you can help, please do so. And remember this is not just an Oregon issue, since libraries like this are used by researchers from around the world, doing research into Oregon's history.

At the moment of marking its 150th anniversary of statehood, Oregon is on the verge of losing the very stuff of its history and its collective memory.

The Oregon Historical Society has announced the closure of its Research Library -- a nationally significant historical resource that is the fount of knowledge for all Oregonians who examine the past in order to understand the present. This action promises to break the Society's trust with its membership, with researchers and educators, and with all Oregonians, who for more than a century have been assured by the Society that their history would be cared for, tended to, and made available to a wide audience.

This is a tragedy that must be faced and a situation that must be resolved. These immense treasures -- millions of items comprised of photographs, diaries, books, manuscripts, newspapers, magazines and journals, maps and charts, business records, personal letters and papers, films, and sound recordings -- must not be allowed to fade into oblivion without our very public and personal efforts to rescue them.

Resolved, that the closure of the Research Library of the Oregon Historical Society is a critical blow to the people of the state of Oregon including hundreds of researchers, students and family historians and authors and filmmakers, and others; and,

Resolved, that this closure and the risks that it brings to the care and preservation of priceless historical materials deserves to be fully examined by concerned Oregonians; and,

Resolved, that while the Society's financial condition is critical and that it requires steep reductions in staff and programs, the maintenance of the Society's Research Library should be its highest priority; and

Resolved, that the Oregon Historical Society must acknowledge its responsibilities to its membership, to the research community, and to all Oregonians, to preserve and to make accessible research materials that have been entrusted to its care and funded by generations of Oregon citizens; and,

Resolved, that the Oregon Historical Society must work transparently and collaboratively to craft a sustainable solution for the Research Library and its irreplaceable collections; and

Resolved, we request the Governor appoint a task force to review the present situation and recommend a permanent and sustainable solution for the Oregon Historical Society Research Library.

LINK TO PETITION
Posted by Edna's Place at 6:04 AM

I just notice this late today, but I did sign this earlier today, but for some reason, my signature didn't show up.