Victoria and Aurélia Thierrée at the Berkeley Repertory Theatre

The exact dates are not available, but the news release said they will be there over the holiday season: 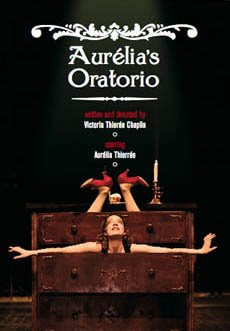 Next, spend the holidays with Aurélia Thierrée, who literally grew up in the circus. Behind her velvet curtain lies a surreal world of surprises, a topsy-turvy time of tricks and transformations.

Welcome to Aurélia’s Oratorio, where the impossible happens before your eyes. The granddaughter of Charlie Chaplin, the literal heir to the Little Tramp, has charmed audiences around the world with this dazzling display of stage illusion. “She does wonder wonderfully,” gushes the London Guardian.

With dancing, puppetry, acrobatics, and more, Aurélia’s Oratorio is an inventive adventure set to a quirky score of chamber music and gypsy jazz. “She balances whimsy and wit, childlike wonder and adult élan, throughout her quietly magical show,” asserts the Boston Globe. “Her grace, her inventive and fluid movement, and above all her humor simply invite our delight.”

Berkeley Rep unveils this 90-minute spectacle, a concoction of mystery and fantasy for the whole family, in the state-of-the-art Roda Theatre. It’s “an absolute spellbinder,” declares the UK’s Daily Telegraph. “Like most vivid reveries, it momentarily colors the way you see the waking world.” - Berkeley Repertory Theatre


So if you live in the San Francisco Bay area and would like to see Chaplin's daughter at work in Aurélia’s Oratorio, mark your calendar and check their schedule for coming dates. (Season tickets are available for the Repertory.)

The players
Aurélia Thierrée grew up in show business, performing with her parents in intimate troupes that introduced the idea of cirque nouveau. She works as an actor, acrobat and illusionist in film, theatre and cabaret—most recently collaborating with the Tiger Lillies—and has given sold-out shows from London to Hong Kong.

Victoria Thierrée Chaplin is the daughter of Charlie Chaplin and the granddaughter of Eugene O’Neill. With her husband Jean Baptiste Thierrée, she created Cirque Bonjour, Cirque Imaginaire and Cirque Invisible, innovative troupes that inspired Cirque du Soleil. They toured the world, and trained their children in the exquisite art of the intimate circus. - Berkeley Repertory

The buzz
“She balances whimsy and wit, childlike wonder and adult elan, throughout her quietly magical show…Her grace, her inventive and fluid movement, and above all her humor simply invite our delight.”—Boston Globe

“An absolute spellbinder…an enchanting dream, and like most vivid reveries, it momentarily colors the way you see the waking world.”—London Daily Telegraph

“Touching and funny…As she pushes the boundaries of ‘normal’ theatre, Aurélia’s Oratorio provides a refreshing reminder that the best circus tricks are timeless.”—London Independent

“Awesome…It’s been a long time since I sat through a show with my mouth literally agape.”—Boston Herald


UPDATE: Live on the east coast? Missed the show because tickets were sold out? Here is your chance again. Aurélia’s Oratorio will be playing July 22- August 2, 2009 at the Loeb Drama Center, Cambridge, Massachusetts. Get your tickets now to not miss out!