Sydney Chaplin, Charlie Chaplin's second son during his marriage to Lita Grey Chaplin, has died at his home in Rancho Mirage, California from complications after a stroke. He was 82. 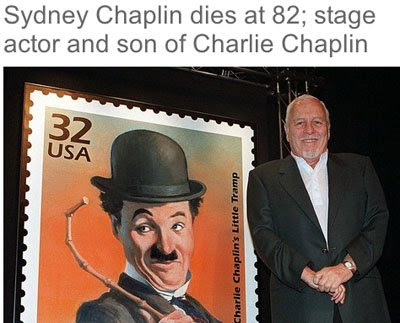 But Sydney's life with his parents, Charlie and Lita Chaplin, would not last long, as his mother took him and his brother, Charlie Chaplin Jr. away from Chaplin's home and started her long divorce from Chaplin.

Sydney and Charlie Jr. wouldn't return to Chaplin's home, until after the divorce, where they would meet Paulette Goddard in the early 1930s. Goddard would become the third Mrs. Chaplin (though there was no official paperwork of their marriage).

Lita Grey Chaplin was very grateful to Paulette. The boys loved her. Paulette became the perfect 'step' mother for the boys at Charlie's home during their visits.

Being around acting, Sydney co-founded a group called The Circle Theater in Los Angeles. His father took an interest in the group, as well.

Both Sydney and Charlie Jr. would play in Chaplin's film Limelight in 1952.

Sydney played the young composer, Neville, who was the love of Terry (Claire Bloom), the ballet dancer in Limelight.

Sydney would continue working in films and plays, including his role in Funny Girl, with Barbara Streisand and Bells are Ringing, with Judy Holliday.

Retired, he would travel to Charlie Chaplin events and gave talks about his father. He also appears in some of the documentaries created for his father.

Sydney had only one child, Stephen, with his wife Noelle Adams.

He married his current wife, Margaret Beebe, in 1998. He is survived by his wife, eight half-siblings (all from the marriage of Oona and Charlie), and one granddaughter.

Story at the LA Times.

Sad news... Seems like he was born about the same time as his step-mother, Oona...

This is absolutely devastating news. Sydney Chaplin was by all accounts a kind, warm, decent man, and one of the last direct links to Chaplin's Hollywood life. RIP.

Oh dear too late to say hello - Grace to You Sydney and your beloved _ I hope your legacy is warmth ,as I enjoy the introspective musings of your Father I , the man of 'heart on his sleeve' .. all eight of them !!