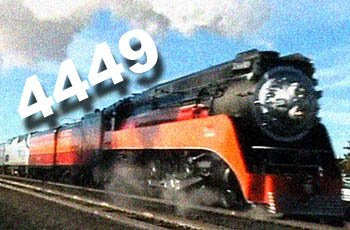 Well, here is the latest about this wonderful locomotive:
it is heading to Michigan to TrainFest 2009!

Here is the press release from The Friends of SP 4449:
Famous Steam Locomotive to
Travel Across Country to Michigan

(March 24, 2009 - Owosso, MI) The "World's Most Famous Steam Locomotive" will travel from it's home in Portland, OR 2500 miles to Owosso, MI for America's Largest Celebration of Railroading in July. Southern Pacific steam locomotive no. 4449 known as the "Daylight" will appear at TrainFestival 2009 in Owosso, MI July 23-26. The massive undertaking to organize this train is being jointly coordinated by The Steam Railroading Institute of Owosso, MI, The Friends of the 4449 of Portland, OR and The Friends of the 261 of Minneapolis, MN.

TrainFestival 2009 is America's Largest Celebration of Railroading and will include 8 steam locomotives under steam, vintage and modern diesel/electric locomotives, various train rides, huge model train layouts, miniature train rides, art exhibit, locomotive cab tours, railroad vendors and much more. This family event is being held as a fund raiser to keep operating Pere Marquette steam locomotive no. 1225. This locomotive owned by the Steam Railroading Institute of Owosso, MI is due for Federal Railroad Administration re-certification in 2010.

This locomotive is best known as the steam locomotive portrayed in the animated movie "The Polar Express". The Southern Pacific Daylight no. 4449 will travel across country on an Amtrak sponsored trip hauling thousands of passengers on this rare excursion.

The locomotive and train will travel through many cities along the way including Spokane, Fargo, Minneapolis, Milwaukee, Chicago, and Lansing. A special excursion will be operated on July 24 originating from TrainFestival 2009, tickets are available online. The locomotive will be on display during the event for visitors to photograph, visit with the crew as well as explore the locomotive cab. Southern Pacific no. 4449 was built in 1941 as a GS-4 "Northern" type locomotive. A 4-8-4 wheel arrangement, she is 110' long, 10' wide and 16' tall.

The locomotive and tender weighs 433 tons, and it operates with a boiler pressure of 300 psi. Her eight 80" diameter drivers and unique booster truck can apply 5,500 horsepower to the rails and exceed 100 mph.

The only remaining operable "streamlined" steam locomotive of the Art Deco era, Southern Pacific no. 4449 pulled Southern Pacific "Daylight" coaches from Los Angeles to San Francisco over the scenic Coast Route and then on to Portland until 1955.

Retired to static display at Oaks Park, OR in 1958, most thought SP 4449 would never run again. In 1974, she was selected to pull the American Freedom Train throughout the United States, and was subsequently rebuilt.

Southern Pacific no. 4449 ran for three years to the delight of over 30 million people. She is arguably one of the most beautiful locomotives ever built -- and kept that way by the all-volunteer Friends of SP 4449! - The Friends of SP 4449

For more information contact TrainFestival 2009.
If you can make it, or see this train travel cross country, certainly try to see it!!!