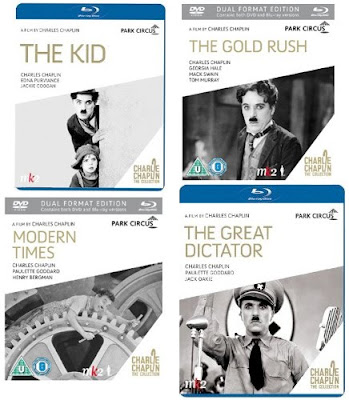 Check online or at your favorite shop. All listed at Amazon UK.
Park Circus home site. (Some available in August 2010)
French release in October - Link
Dual release (DVD/BluRay) for pal.
You can check this link for screenings from Park Circus.

Note: In looking for more information about these, it is sounding pretty much the same collection as Warner Brothers released from a few years ago for the DVD. And until I can see a 'side by side' comparison, I can't comment on the Blu-Ray editions of these. Personally, my favorite collection of films is the Image Entertainment release, which were the first DVD releases. Why? Because those releases had Chaplin's original film edit from his film years, and not the re-edits he did years later when living in Europe. In what they lack, you gain in seeing Chaplin original vision from his film years. They are out of print and getting harder to find.
Posted by Edna's Place at 6:09 AM

I wish Carl Davis' recording of Chaplin's 1941 score for the Gold Rush would be added to the 1925 version of the film!

I know what you mean, Paul. Because of Charlie edits, it wouldn't exactly match, but would love to have that, as well.