will be re-released
with the Criterion Collection 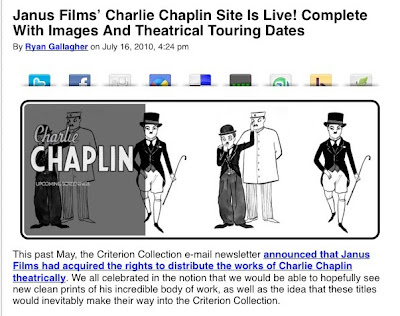 "We all celebrated in the notion that we would be able to hopefully see new clean prints of his incredible body of work, as well as the idea that these titles would inevitably make their way into the Criterion Collection.

Whether these titles would be available individually, in box sets (either in Criterion proper, or in the Eclipse Series), or some combination of the two, we still have not heard a definitive statement from Criterion. It is highly likely that we’ll get an announcement for either November or December, as many would love a complete Charlie Chaplin box set to find it’s way onto their holiday wish list." - Janus Films

Link to Janus new Chaplin Film site. Chaplin art work by Kate Beaton. (Note: The Warner Brother release of these films is out of print.)
Posted by Edna's Place at 6:58 PM