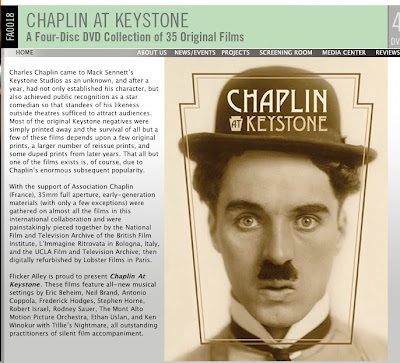 Charlie Chaplin at Keystone Films
"Flicker Alley is proud to present Chaplin At Keystone. These films feature all-new musical settings by Eric Beheim, Neil Brand, Antonio Coppola, Frederick Hodges, Stephen Horne, Robert Israel, Rodney Sauer, The Mont Alto Motion Picture Orchestra, Ethan Uslan, and Ken Winokur with Tillie’s Nightmare, all outstanding practitioners of silent film accompaniment.
With the support of Association Chaplin (France), 35mm full aperture, early-generation materials (with only a few exceptions) were gathered on almost all the films in this international collaboration and were painstakingly pieced together by the National Film and Television Archive of the British Film Institute, L’Immagine Ritrovata in Bologna, Italy, and the UCLA Film and Television Archive; then digitally refurbished by Lobster Films in Paris." - Flicker Alley
Flicker Alley is running a special pre-order with free shipping in the USA for $59.96 (List Price $79.95). More to come!
UPDATE from FLICKER
The CHAPLIN AT KEYSTONE
4-disc DVD set is currently a pre-release publication
scheduled to ship on or before Oct. 26, 2010.
Update: A re-visit to CNN's report on the restored Chaplin Keystones:

I don't know what zone you are in for playing DVDs, but I am sure you will be able to order it. Flicker is the first place, so far, I have seen with it, for pre-order.

On the 'grape-vine' it sounds like a fall release, so looking it might be available for the Christmas season? But mainly, just have to keep checking. At least getting closer to really happening.