The Rainbow Orchid being published in the Netherlands! 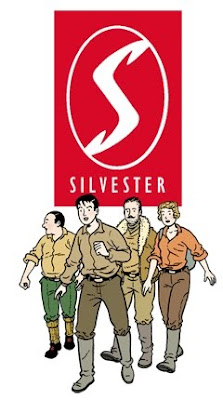 Congratulations!
to Garen Ewing
and The Rainbow Orchid
for being published in
The Netherlands

Garen will be making a special trip to Houten to attend the September 26th launch of volume one of The Rainbow Orchid in the Netherlands.

"British all-ages adventure comic The Rainbow Orchid is to be published in the Netherlands by Silvester Strips. It will be released in three parts, with volume 1 at
the end of September 2010, volume 2 in January 2011, and volume 3 in May 2011.

This follows the lead set by the book's UK publisher, Egmont, who acquired the comic in 2008 and published the first volume in July 2009. The third and final volume of the story should appear at about the same time in both English and Dutch early in 2011.

The book's author, Garen Ewing, said "I'm delighted to be working with Silvio Van Der Loo and his team at Silvester Strips, and I understand that I'm lucky enough to have one of their best translators, Mat Schifferstein, working on the books. A huge thanks to Oliver Munson, my agent at Blake Friedmann, for making this deal happen."

Garen will be travelling to the Netherlands to appear on the second day of De Stripdagen in Houten, on 26 September, to launch the book, the day after appearing with comic creators Dave McKean and Robin Etherington at the Bath Festival of Children's Literature." - official release from The Rainbow Orchid