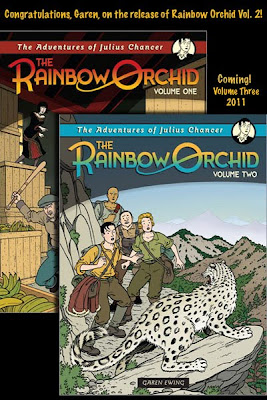 • Learn more about the creator? My special podcast interview and link archive here


Anyone following my Edna sites over the years, know I am a huge fan of The Rainbow Orchid series. I love this book series! I watched it grow from nearly the start, before I began my ednapurviance.org site in November 2001. I can honestly say, Garen has surprised me with his story, which is exactly what I love (a complex story with twisting plots and intriguing characters). It is also beautifully drawn in the European clear line style that I love.

The full story is being presented in three books from Egmont UK, with Volume three coming out in 2011. If you love complex stories and intriguing characters, you certainly should check out The Rainbow Orchid Volume One and Two. I know for sure, I am not alone in loving this series, as fans young and old are finding out. The Rainbow Orchid is published by Egmont UK, with story and artwork by Garen Ewing. Check out Garen's fabulous web site today! LINK

Update June 8, 2010 - I have gotten my copy of The Rainbow Orchid Volume 2! While I have been reading the comic online for years, seeing the printed book and all the new material was extra exciting! Volume two never ended online, so a real treat to read and see for the first time. And, not to give anything away, the cliffhanger ending was a real heart stopper for me. I never expected it in a second! I still going through the tissues. Absolutely beautifully illustrated, in a style I love, with a story and characters that keep me totally captured. It is available many places, but I especially love the sketch editions from Garen's site, for that extra special touch! Looking forward to the final part of the three part series.

FanArt: Drawing by Linda Wada of a very young, 8-year-old, Josette Tayaut (Garen Ewing's Rainbow Orchid character from Volume 1 & 2) visiting Chaplin's studio in Hollywood. Tayaut twins were modeled after Jackie Coogan from The Kid, but are older in his story. Lily Lawrence, the leading woman character in the story, is a silent film actress, and a friend of Edna Purviance. They are pictured in a lovely drawing by Garen in the back of Volume One of The Rainbow Orchid.
Posted by Edna's Place at 12:00 AM