Limelight: The Story of Charlie Chaplin 'The Musical' 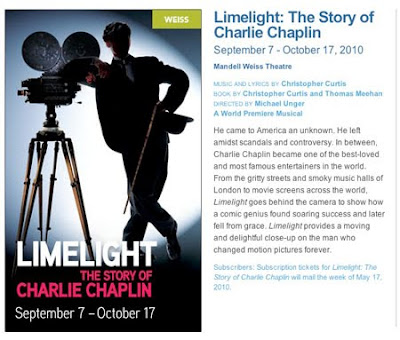 "He came to America an unknown. He left amidst scandals and controversy. In between, Charlie Chaplin became one of the best-loved and most famous entertainers in the world. From the gritty streets and smoky music halls of London to movie screens across the world, Limelight goes behind the camera to show how a comic genius found soaring success and later fell from grace. Limelight provides a moving and delightful close-up on the man who changed motion pictures forever." - La Jolla Playhouse
Posted by Edna's Place at 6:47 AM

I have not been as moved in a production since seeing Billy Elliott in London. (Intriguingly, both plays chart the transformation of underclass Brits). Chaplin is essentially reincarnated by McClure, who has a robust and assured singing voice, and a stellar, nimble physicality. The songs effectively drive the plot forward, which is no small feat given the monumental challenge of distilling the scope of Chaplin's life story.

The La Jolla Playhouse has developed a remarkable history of sending challenging musicals to great success. Limelight will continue that legacy.

Thanks for the update on the production! Would have loved to have seen it!